Despite pressure from within my own organisation I have instructed that there be no serious escalation in our activity. However, if as has been the case to date, we are unable to resolve the issues directly with Fujitsu management, we will have no choice but to bring our concerns to the attention of other stakeholders. This could include Fujitsu; customers, competitors, shareholders, analysts, commentators, partners, suppliers, governments and regulators.

Fujitsu workers in Manchester are currently taking a 9-day strike, having previously taken 50 strike days. They are fighting against victimisation of union reps (including Ian Allinson who was dismissed in January) compulsory redundancies, and breaches of agreements. 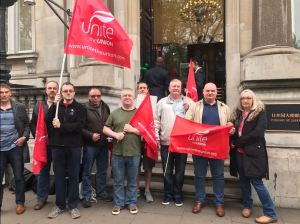 On Thursday 5 April protesters will be taking the message about Fujitsu’s unethical and possibly illegal behaviour to the Japanese embassy in London. Please join the protest if you can. Full details are on tiny.cc/fujitsudispute or on the Facebook event.

On Friday 6 April strikers and supporters will be protesting outside Fujitsu’s offices in Manchester between 7-10am. There will be a rally around 8:30am. Full details are on tiny.cc/fujitsudispute or on the Facebook event.

On Friday 13 April at 7:30pm supporters have organised a solidarity fundraising gig at the Woolworths Club, Gipsy Lane, Castleton, OL11 3HA. There will be live music from Gerry O & Friends. £5 on door, all welcome. [Facebook event].

For more information on the dispute and how to support us, see tiny.cc/fujitsudispute.